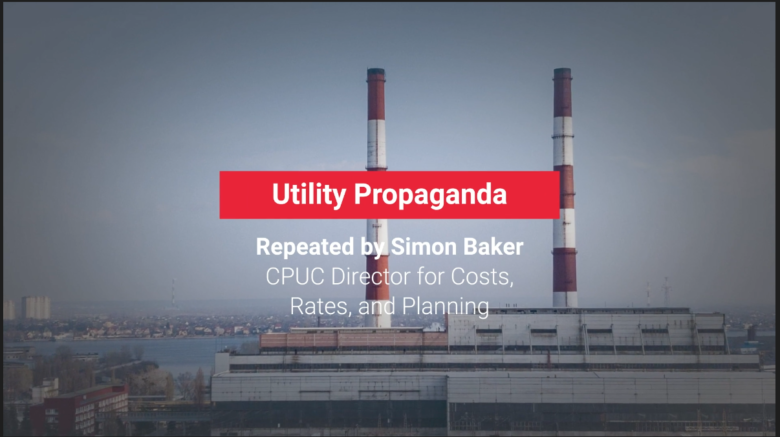 Following weeks of silence, the first substantive remarks on rooftop solar have started to trickle out of the California Public Utilities Commission (CPUC).

These remarks paint the picture of a government agency unabashedly selling utility propaganda against rooftop solar. They also suggest that the CPUC didn’t actually get the overwhelming message from the public, and is planning to reissue a new proposed decision that persists in making rooftop solar less affordable for consumers.

It is odd that one of the the first substantive comments by the CPUC is coming by way of a Facebook post. Even more concerning: this CPUC official appears to be defending the CPUC’s proposal for a $700 / year Solar Tax and deep cuts to the credit for sharing extra solar energy with the grid. This, after everyone from consumers to Governor Newsom rejected that offering.

Indeed, Mr. Westling relies on the same baseless “cost shift” premise that led to the initial proposed decision, which caused so much backlash. [see our white paper outlining how the “cost shift” is based on deceptive accounting methods] Mr. Westling also repeats a common utility talking point about the demographics of rooftop solar. In fact, just under half of all new solar is going into middle and working class neighborhoods, and increasingly going to renters.

This CPUC official is entitled to his private opinion. But public servants are expected to be independent curators of the facts. This post suggests that this particular public official is not up for the task.

On March 2nd 2022, the CPUC Deputy Director for Costs, Rates and Planning told different panel of powerful Assemblymembers that it was a “fact” that rooftop solar is more expensive than solar and wind farms. This is a common utility talking point that ignores the high costs of transporting energy from solar and wind farms over long distance power lines.

We break it down in this two minute video:

Later that month, the same CPUC official went back to a different Legislative panel and repeated more utility propaganda. This time, the official repeated the false utility claim that rooftop solar is a major reason why utility bills are increasing. We show how this claim is false in this video:

The CPUC’s official information is riddled with conflicts of interest

Last year, the CPUC hired a consulting firm called E3 to conduct an independent analysis of rooftop solar’s costs and benefits. E3’s other clients? PG&E, SoCal Edison, Sempra Energy and most other North American private utilities. Not shockingly, E3’s report repeated many of the same claims that the utilities make – namely that rooftop solar is responsible for rising electricity bills. [see our white paper starting on p. 5 for more detail]

The CPUC went on tour in March to sell utility misinformation to lawmakers about rooftop solar. Consumers got more rate hikes. And PG&E’s CEO got $50 million. Woo hoo!

It’s concerning, to say the least. And begs the question: where does Gov. Newsom stand?