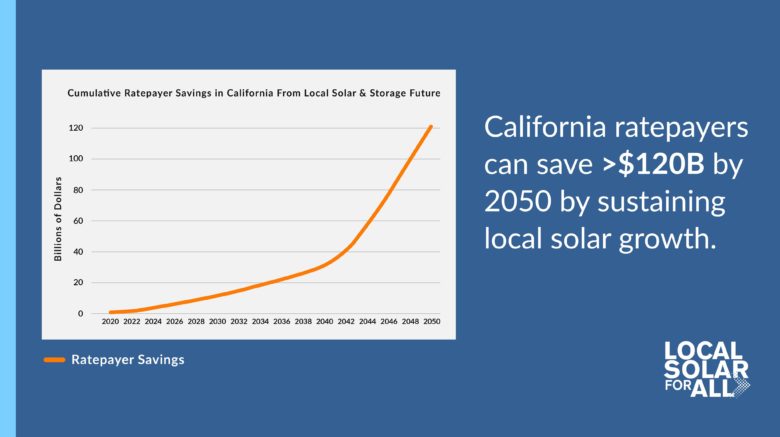 The utility profit grab to kill rooftop solar will cost California consumers $120 billion and squander 374,000 clean energy jobs over the next thirty years.

Rooftop solar and batteries reduce the cost of the electrical grid

The report found that by making electricity closer to where it is used, the state reduces the need for long-distance power lines and giant wind farms.

The report confirms a trend we have been witnessing for several years. In 2018 alone, state energy officials scaled back $2.6 billion worth of power line projects. That’s thanks to both rooftop solar and energy efficiency. This year, the state reported that power line spending remained relatively flat, again thanks to efficiency and local solar.

The Vibrant report shows that these kinds of savings will get bigger in the years to come.

Our electrical grid is expensive and will get even more expensive. Rooftop solar and batteries mitigate these costs.

Then there’s the cost of switching over from fossil fuels to renewable energy. The state’s goal is to retire all fossil fuel sources in the next decade or so, while also encouraging all residents to switch to electric cars and appliances.

That means the state has to build lots of new renewable energy and long-distance power lines to ensure there’s enough electricity to meet rising demand.

That’s before we get to eye-popping proposals by PG&E to charge ratepayers $20 billion to put power lines underground.

The fact that rooftop solar and battery storage mitigates these costs is great news for the public.

The Vibrant report also found that the continued growth of rooftop solar would create 374,000 more jobs than if we kill the rooftop solar market and get our energy simply from large solar and wind farms. This job growth will happen in every county in California.

That means sense because rooftop solar and battery storage is labor intensive and local.

The state’s current approach to energy planning is outdated

The methodology used by Vibrant to quantify the savings from rooftop solar stands in stark contrast to the methods used by state officials and utilities.

The Vibrant model looks out to 2050, the year California expects to fully switch to renewable energy, and uses a massive amount of very granular data, ten times more data than conventional modeling, to look at every possible way to make the energy system more cost-effective.

The state’s approach relies on consultants who look only out to 2030 and rely on outdated or assumptions and a tiny fraction of the data that Vibrant uses.

It would not be a stretch to also say that the state’s current approach to energy planning is also corrupt. The preferred energy consultant for CA Public Utilities Commission (CPUC), E3, also has numerous paid contracts with utilities, and routinely produces research slanted against rooftop solar.

In June, for example, the  CPUC unanimously voted to adopt a proposal by E3 to bias its energy planning model towards solar and wind farms and against rooftop solar. The CPUC made these last minute changes despite 7,000 public comments opposing the changes.  More detail

The battle to save rooftop solar is real

The findings of this groundbreaking report underscore the high stakes of the battle to save rooftop solar. Utilities are running a vicious utility lobbying campaign to gut net metering, the foundational policy that has helped over a million Californians obtain solar. Net metering is what lets solar users share their extra solar energy with the neighbors for a bill credit.

Utilities and their allies are lobbying the California Public Utilities Commission (CPUC) to charge solar users between $56 and $91/month just to have solar, while slashing the solar credit by 80%.

They justify their position with a false claim that your rooftop solar is the culprit for rising electricity bills. It’s a lie of course, and the Vibrant report is more evidence of that.

Underneath all of this is a simple fact: utilities make their profits by spending more money – your money – building and maintaining long-distance power lines.

What’s crazy is that the utilities still stand to make tons of profit in the years to come, even with rooftop solar. And yet, they are still trying to kill rooftop solar. If they win, we all end up paying more.

Don’t let the utilities get away with it.