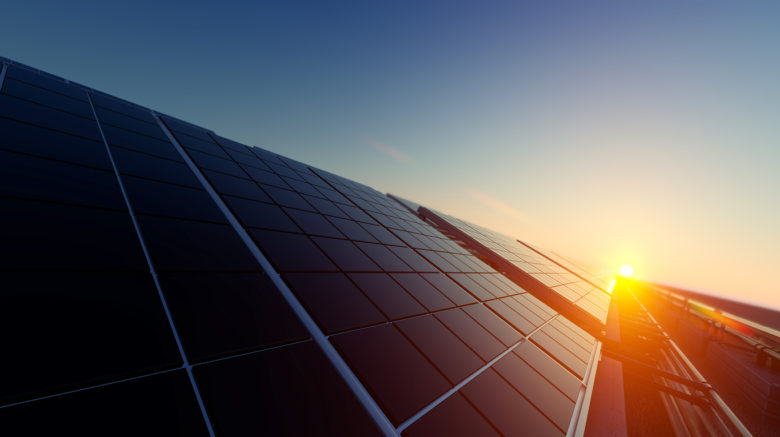 Last week, the CA Public Utilities Commission (CPUC) formally launched a review of the cornerstone policy for rooftop solar, net metering. We expected this to happen, and are preparing to fight back against an utility lobbying campaign aimed at killing off rooftop solar in California.

Everything you need to know about rooftop solar’s value happened on August 14th. You’ll recall that was a horrible week of massive power outages. But without your rooftop solar, it would have been a lot worse.

The red line on the chart below shows the load on the grid throughout the course of that day. The data is from the state’s primary grid operator, CAISO. The yellow line shows what the load would have been without rooftop solar. The dotted line is what the load could have been if there were more solar-powered batteries that store their extra energy to use later in the day. Bottom line: solar already reduces the burden on the grid, and could do a whole lot more. 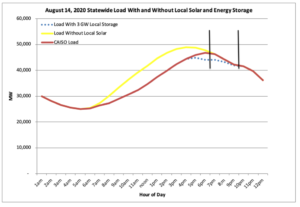 That week, even utilities were begging rooftop solar customers to get in the game: 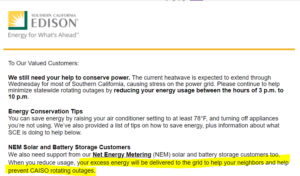 This speaks for itself but bears repeating. As the price of solar continues to fall, more middle and low-income people are accessing solar. That means solar’s savings have an even greater impact. The chart below from the Lawrence Berkeley Lab shows this amazing trend. 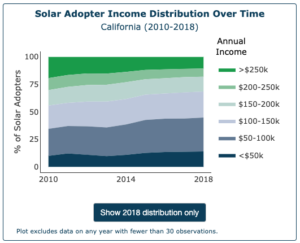 Over 100,000 California households and businesses adopt solar every year. More and more people are choosing solar with batteries. This lets people power their home or business in the evening with solar energy that was produced in the daytime.

At minimum, the CPUC should ensure that this trend continue. It should also set policies that drive down the cost of batteries so even more people can access them.

Net metering is the foundation of rooftop solar

Net metering allows utilities to sell your solar power to your neighbors when you are producing more energy than you are using. It is the backbone of solar. Kill net metering and you kill local solar.

Utilities have been quietly and aggressively lobbying the CPUC for several years to cut net metering. Now, they are taking their arguments public with opinion editorials and videos that trash rooftop solar.

The utility strategy: argue that rooftop solar users like you don’t pay their fair share, and force other customers to pay more. It’s nonsense.

Slowing down rooftop solar and storage is pure foolishness

Power outages. Rising utility bills. Fires sparked by long-distance power lines. Pollution. Rooftop solar and storage is helping to solve all of these problems. Why in the world would state regulators even consider slowing down the momentum by slashing net metering?

What you can do

Over the next few weeks and months, expect to hear from us with requests to submit public comments to the CPUC. Also expect requests for you to give oral testimony to the CPUC via videoconference. Please respond to those requests — your voice really matters to the CPUC.

In addition, please spread the word. Utilities will be very aggressive in pushing their misinformation about solar to the public. You can counter that by forwarding emails we send to you, and following and sharing our posts on Facebook, Twitter and Instagram.