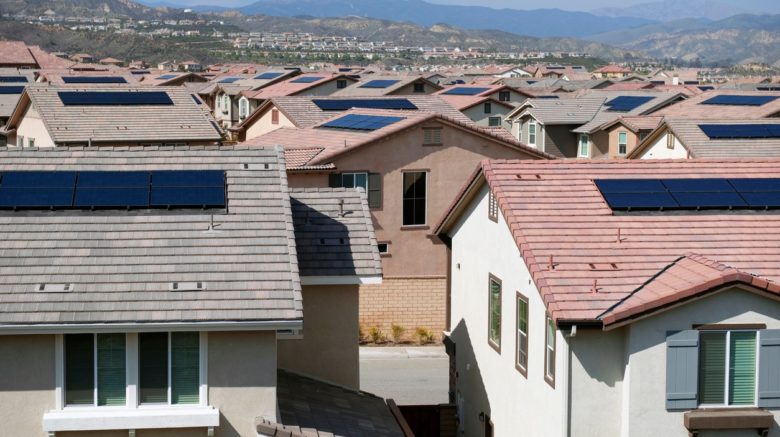 Los Angeles Times reporter Sammy Roth ran a news story this week that describes how solar and batteries can make mass power outages a thing of the past while also reducing pollution.

1) Your solar helped keep the lights on this week. Thank you!

“The president of California’s power grid operator, Stephen Berberich, dismissed those types of criticisms, saying renewable energy wasn’t to blame for the outages. The real problem, he said, was a statewide failure to assemble the right mix of energy sources for the completely predictable situation of electricity demand staying high after the sun goes down.”

In fact, solar helped allieviate pressure on the grid during the peak daytime hours. The CA Solar & Storage Association distributed the below chart. It shows how California’s 1 million solar roofs help lower peak demand on on August 14th. Without your solar, the strain on the electrical grid would be even greater.

The red line shows the load on the grid throughout the course of that day. The source is the state’s primary grid operator, the CA Independent Systems Operator (CALISO). The yellow line shows what the load would be without rooftop solar. We’ll get to the dotted line later in this article. 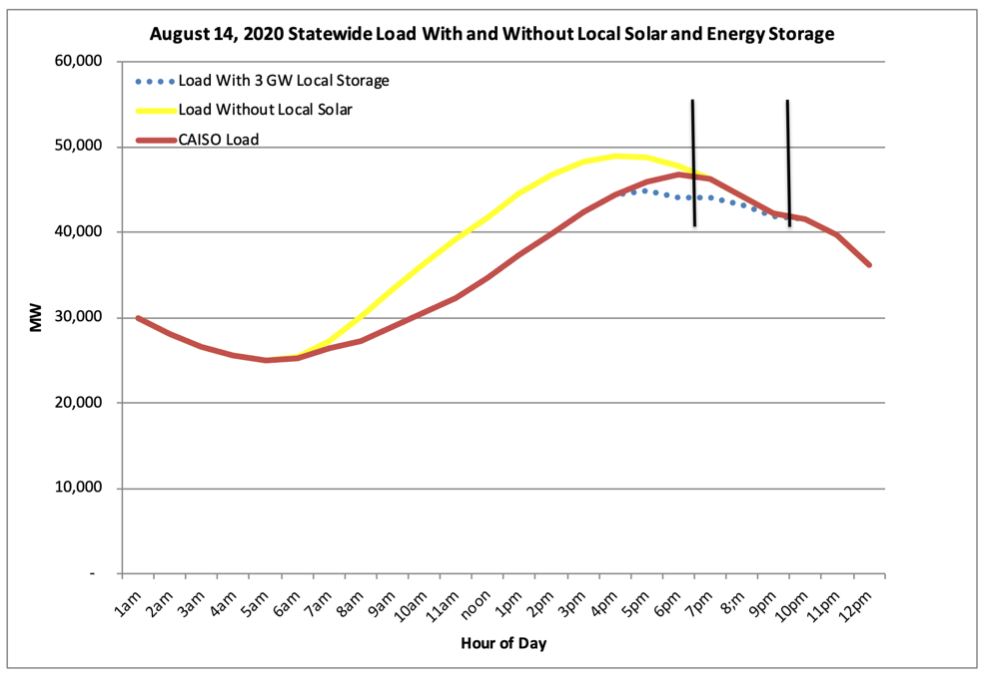 Even utilities were agknowledging the impact solar users had. Here’s SoCal Edison’s email to one of its customers: 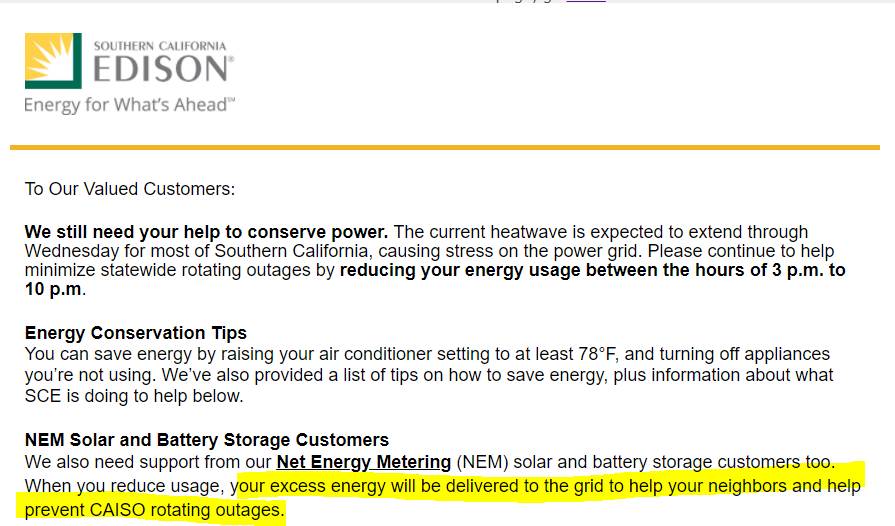 2) Solar powered batteries are a game-changer.

A solar-powered  battery lets you store your extra solar energy to use when the sun isn’t out. For consumers, a battery can almost eliminate the need to use the grid. It can also keep essential lights and appliances running during outages. Learn more about shopping for batteries.

Solar-powered batteries further reduce the strain on the grid. They also let your neighbors use your extra solar energy any time of the day. Going back to the above chart, the dotted line shows how solar could have had an even bigger impact on August 14th if most of the solar had been paired with a battery.

Most of today’s solar is not paired with a battery, but that’s changing fast. Today’s battery technology stores about four hours of solar power. Prices are declining at a similar rate as solar did ten years ago. In a few more years, battery storage will likely come standard with solar.

Now that there are one million California solar users, we’re calling for a new goal of one million solar-powered batteries.  As the LA Times reported:

“The end goal is for networks of far-flung solar panels and storage systems to operate as “virtual power plants” that can help electric utilities meet demand, including during heat waves. Homes and businesses would sign up for programs in which they’d agree to occasionally discharge their batteries in unison when called upon, in exchange for financial compensation.

“It takes the Flex Alert and puts it on speed,” said Bernadette Del Chiaro, executive director of the California Solar and Storage Assn., a trade group. “It’s not just, ‘Turn off your lights and set your thermostat to 78.’ It’s do those things and give us 5 kilowatt-hours from your battery in your garage. And we’ll pay you for it.””

Oakland is showing how this gets done. They are installing discounted solar and battery systems in homes and apartment buildings that will serve 6,000 residents. Those residents get to cut their energy bills. They will send up to 20 megawatts of energy back to the grid when it is most needed. The city won’t have to rely on a polluting power plant during peak demand, which means less air pollution and a safer climate. Win, win, win!

4) State officials don’t seem to get it yet.

It is all exciting, but the LA Times also points out this sobering truth:

“…big utility companies and state regulators, including the Public Utilities Commission and the Independent System Operator, are biased toward traditional power plants and have mostly failed to embrace the concept [of virtual power plants].”

But the problem is deeper than these regulatory bodies. We see this same lack of vision coming from Governor Newsom, the legislature and locally-run utilities like SMUD and LADWP. Whether because of utility-industry influence or lack of creativity, most of those in charge appear to only imagine a world where energy is run by a centralized top down monopoly.

5) Your job, and ours, is to break through with a better vision.

Our task is to break through with a better vision in which the people are empowered to make, store and share energy from the sun in a huge way — keeping the lights on, giving people control over their energy bills, and cleaning up the environment.

That’s obviously what you’re doing already, and I thank you for it! Let’s lean in and use our voices to demand that our leaders follow suit.

Here’s the link to the LA Times article again.