In November, the utility that services the Sacramento area (SMUD) tried to pass a plan that would have denied solar to thousands of new residents over the next twenty years.

Local solar users pushed back and state officials put the brakes on SMUD’s plan. Could this be a chance to increase solar in the Sacramento area, or will SMUD’s plan prevail?

Starting in January 2020, the state will require newly built homes to have solar on them and encourage the addition of a battery as well. Putting solar on homes during construction lowers the upfront cost and saves residents a ton of money on their energy bill over the long run. And with a battery, homeowners can keep the power on during blackouts. Solar is good for consumers and it is here to stay, so it just makes sense to build it into our new construction as a standard feature, just like double-paned windows and insulation.

But now SMUD is trying to cut a deal that would keep solar off new homes in the Sacramento area. SMUD would also make it harder for new homeowners to add solar or battery storage after they buy the home!

SMUD claims their plan is better than rooftop solar because they will supply energy from SMUD’s solar farms. But it isn’t a better deal at all. SMUD’s plan will save new residents just $20 per year on average – a pittance compared to the savings from rooftop solar.

SMUD’s proposal came just months after an attempt to crush solar users with a new monthly fee (which was scrapped after a public outcry).

In November, the California Energy Commission (CEC) held a public hearing on SMUD’s proposal. The room was packed with opponents of the proposal. Hundreds of local solar users had already emailed a comment to the Commission in the weeks leading up to the hearing, and the room was packed with solar users. Statewide media outlets, including the LA Times had already published articles on the issue.

After several hours of testimony and discussion, the CEC tabled the proposal.

A small but mighty band of local solar users, led by Elk Grove resident Lee Miller (below, second from right), helped rally the solar user community. It’s a good example of how speaking out and getting organized makes a difference! 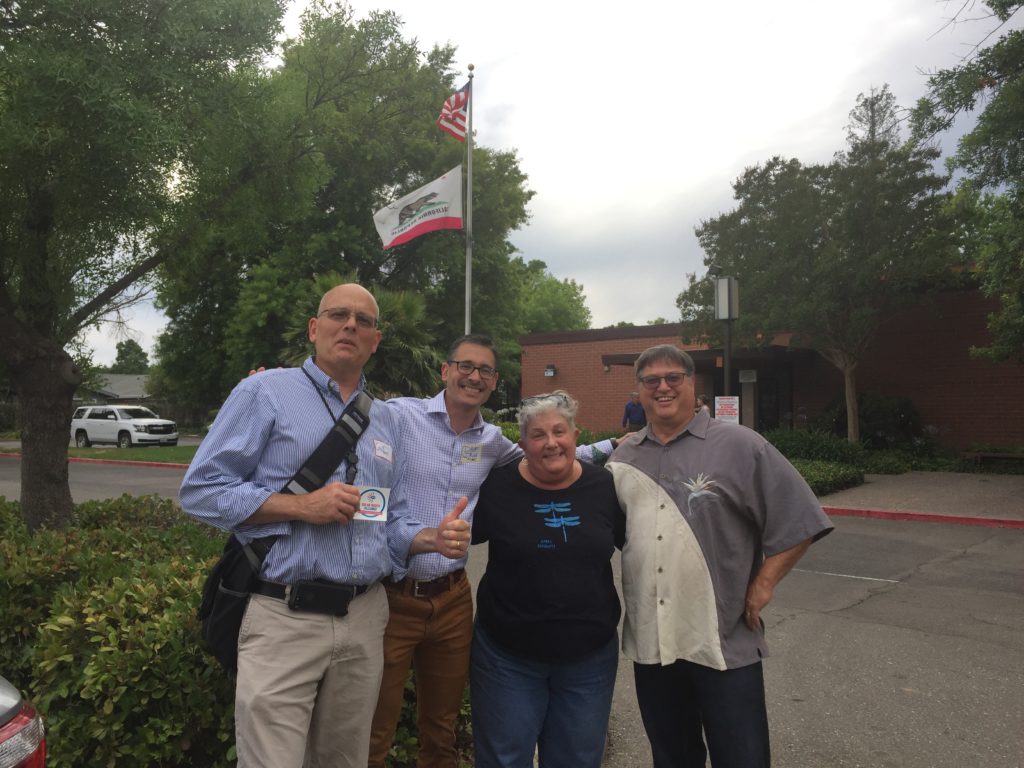 The fight isn’t over because state officials didn’t reject SMUD’s plan outright. They instead decided they needed to first develop clearer guidelines for what is called Community Solar, so SMUD can return with a better proposal.

Community Solar is a way for people to make their own solar energy if, for example, they are a renter, or their home has too much shade.  It works by allowing those consumers to directly access energy from solar panels and batteries nearby, but not directly on the premises.

Community Solar could be a great thing. But the devil is in the details. SMUD’s proposal was not Community Solar, but rather a play to stop the growth of rooftop solar and lock in SMUD’s monopoly. Truly consumer-friendly Community Solar option must look like the following:

If state officials approve a Community Solar option described above, while ensuring that SMUD doesn’t meddle with the majority of new homes that are perfectly suited for solar and storage, it would be a win for everyone.

Los Angeles Times: California, don’t back down from your own rules requiring solar panels on new homes

Solar Rights Alliance’s formal letter of opposition to the CEC

In-depth analysis of SMUD’s proposal by the solar industry