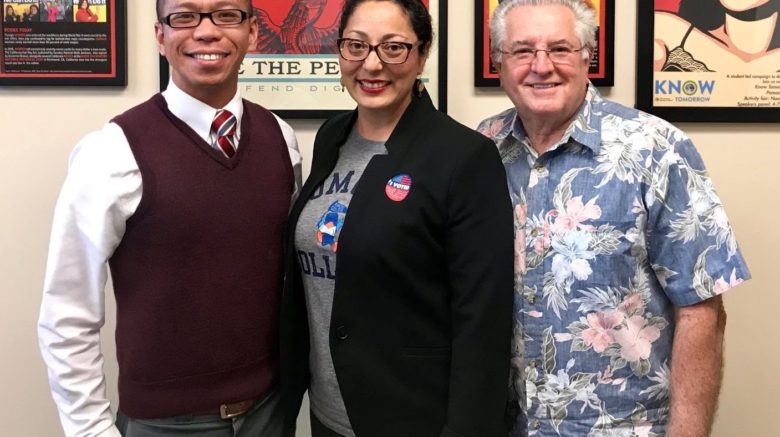 “…your officials have an interest in getting re-elected. Meeting with them, expressing your point to them directly, I think it can have a big impact.”

We agree with Raj. The Solar Bill of Rights was approved unanimously by the Senate Energy Committee in April in large part because the room was packed with 50 supporters, outnumbering the handful of utility industry lobbyists.

It is also likely that the Solar Bill of Rights was gutted in secret with no public notification by the Senate Appropriations Committee precisely because utility lobbyists know they can’t win when the conversation is public.

Our vision: a network of solar users showing up locally

Our goal is to build the visibility and power of solar users by ensuring that each Assemblymember and Senator meets face-to-face with a small group of solar users like you a few times each year.

Solar Rights Alliance members have already done 20 of these local meetings this year (list below), which is amazing.

If we see this vision through, we will more effectively defend and spread the right to make solar energy on our property, and stymie the influence of the utilities.

It would be a major breakthrough that could spell the end of discriminatory fees and red tape, and the attacks on the net metering credit.

Will you consider signing up for a local meeting with your state representatives?

Here’s a few reasons to consider it:

Showing up matters, whether through a personal meeting with your lawmaker or testifying at a public hearing.

This is true even in a political system sloshing with utility industry cash.

That’s because elected officials are still human beings, and are most impacted when their voters advocate to them in the flesh.

Most people don’t show up. That means the ones that do show up have an outsized voice.

Showing up makes it personal

Robert Mills of San Rafael sat down and told his State Senator Mike McGuire how PG&E delayed his solar installation. That personal meeting was worth more than 100 briefing papers. That’s because like most of us, elected officials are moved more by human stories than by dry facts.

Because they had a chance to talk face-to-face, Assemblywoman Cristina Garcia (below photo, middle) will likely remember Mel Biado of Pico Rivera and Tom Carter (far left and far right) in the future, and be open to their points of view going forward.

When Lee Miller, Gabor Leidenfrost, Alan Escardta and thirty other Sacramento-area community members publicly testified against their local utility’s anti-solar fee, it showed utility officials that the community was with us.

It is hard for an elected officials to look across a packed hearing room like the one below, and not feel moved.

Here’s what you accomplish by showing up

You will learn how to effectively advocate for your solar rights.

You will learn how to persuade your representatives to reject the myths spread by utility lobbyists.

You will convince your representatives to vote more frequently for pro-solar politics.

Interested in attending a face-to-face meeting with your representatives?

Congrats to these solar superstars

We want to acknowledge the individuals below who went the extra mile to meet with their lawmakers or advisers.

This list doesn’t capture the sixty other individuals who have showed up to offer personal testimony to public officials over the last few months. Those folks also deserve kudos!

All your actions matter

Not everyone has the luxury to show up, whether for health reasons or other obligations. That’s OK: your emails and phone calls greatly matter. It takes everyone doing everything they can to stand up to the power of the electric utilities.

Thank you for all your efforts! We appreciate you.