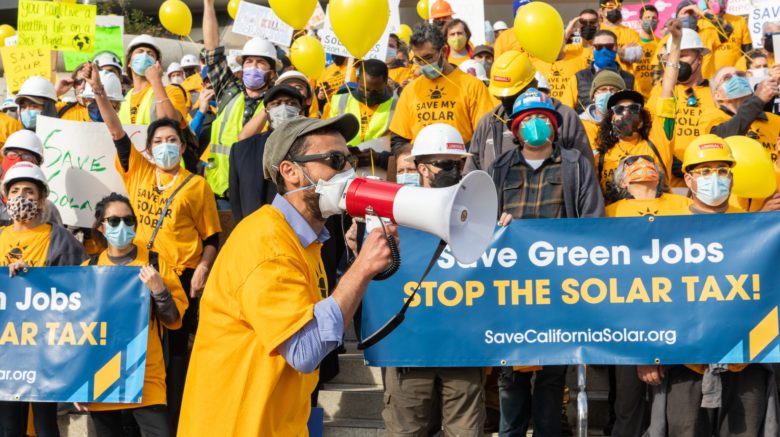 In February, thanks to a massive public outcry, the California Public Utilities Commission (CPUC) shelved their proposal to slap consumers with a Solar Tax averaging $700 per year.

But since then, the CPUC and Gov. Newsom have been silent on what comes next. It’s possible they are working on other ways to sneak the Solar Tax back to the table. Here’s how they could do it, and how we can make sure this doesn’t happen.

There were other terrible aspects of their proposal too, which you can refresh your memory here. But the Solar Tax was undoubtedly the most outrageous – a tax just for putting solar panels on your roof! A tax designed to claw back the money PG&E and the other utilities believe they are entitled to extract from you for the energy you make yourself.

Kudos to the public for pushing  back and forcing the CPUC back to the drawing board. But, where there’s a will, there’s a way. And the utilities have a lot of money and power to create the political will for politicians to try and slip in a Solar Tax through other methods.

It is entirely possible that the CPUC is going to pull off one of the oldest tricks in the book: ask for double what you ultimately want so that anything less looks like a “reasonable compromise”.

In this case, the CPUC might propose a smaller Solar Tax and say: “look how reasonable we are!”

But we won’t be fooled. Any tax on solar power is a really bad idea. There is nothing reasonable or justified about a Solar Tax of even $1. And as everyone knows, taxes never go down, they only go up.

Sneaky Tax #2: They could slip a Solar Tax into the fine print of your rate plan

Instead of a stand-alone Solar Tax, the CPUC could require all solar users onto a rate plan that has a Solar Tax baked into the fine print. For example, we hear they are considering forcing solar users onto an “electrification rate” that by design has a fixed charge of $12 to $16 per month (that could increase over time).

The CPUC would likely argue the electrification rate is a good deal for solar users who also get batteries, electric cars and electric appliances.

But that’s just a smokescreen to distract people from the Solar Tax in the fine print. People can decide for themselves if a particular rate plan is in their interests, thank you very much. Especially since many middle and working class households cannot yet afford batteries or electric cars.

Sneaky Tax #3: They could tax you for the energy you don’t buy from the utility

Yes, you read that correctly. The CPUC is considering taxing people for the energy their solar panels make and use to power their lights, refrigerators and air conditioners.

They would call this tax a “non-bypassable charge”, and would apply it to the amount of energy you are producing and using on the premises. They would base the tax on the size of your solar system. The bigger your system, the more energy you make and consume at home, the bigger the tax.

The utilities already succeeded in getting a version of this back in 2016, when the CPUC adopted two big changes to the net metering program. The 2016 changes (“NEM 2.0”) put all solar users on a mandatory “Time of Use” rate and applied so-called “non-bypassable charges” to the extra energy you export to the grid. Today, these charges reduce the value of your solar credits by  2.2 to 2.4 cents per kilowatt hour.

In other words, they would tax a residential solar user $110 a year for the energy you would have otherwise bought from the utility. Or rather, a $110 Solar Tax to punish you for not buying the monopoly’s energy. And that’s only the beginning. There is a very real chance that additional charges get added over the years. In other words, a $110 annual Solar Tax today, could very easily become much higher in the years to come.

What’s next? Tax people who hang dry their clothes?

The idea of taxing people for reducing the amount of energy they buy from the utility is so absurd. Will they apply these charges to people who hang dry their clothing instead of running their clothes dryer? Or people who put in LED lightbulbs? Why stop there? Should we also tax people who grow their own food to reduce their grocery store bill?

This is classic monopolistic rent-seeking, and it would be laughable were it not being taken seriously at the highest levels of California’s government.

What would the Solar Tax be used for?

To line the utilities’ pockets of course.

But solar users most certainly do pay for these programs through the electricity we still buy from the utility, the $10/month minimum bill, and the existing deductions from our solar credits outlined above. Moreover, solar users actually reduce the cost of the grid, saving all ratepayers money. We should be incentivizing this behavior, not penalizing it.

So this isn’t about fairness. It’s about extracting a pound of flesh from solar users to discourage people from going solar to begin with. And in doing so, preserving the utility money-making monopoly.

California should encourage solar energy, not penalize people for doing the right thing

The bottom line is that it makes zero sense to penalize people for putting solar panels on their roof.

It’s not about the size of the Solar Tax, or the mechanism.

A Solar Tax of $1 is ludicrous. Any tax that has the practical effect of singling out solar users is a Solar Tax. Rooftop solar creates so many benefits for society that government should be giving consumers money for investing in solar.

But even that misses the mark. California should be mapping out a fool-proof pathway keep growing solar energy. We should be doing everything we can to double and triple the amount of solar panels on roofs throughout the state. It should be our goal to meet our clean energy goals ahead of schedule and with the least impact on open space and the greatest impact on jobs and economic development.

The people spoke loudly against the CPUC’s first Solar Tax. Let’s get ourselves educated and speak even more loudly if the CPUC tries to sneak it by us again.

And, then, let’s make sure the state of California goes further, pushing for more solar energy that is more affordable to more people. More consumer choice, more innovation and reliability and more local, good paying clean energy jobs. These should be our goals and the public should hold Governor Newsom to it, and nothing less.