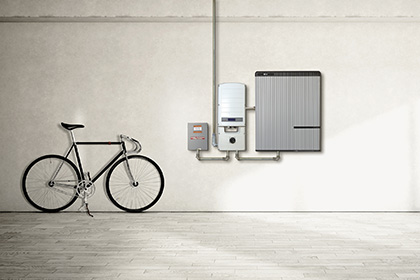 This week’s LA Times reports that increasing the number of solar homes and businesses with battery backup could help avert massive power outages during next summer’s likely heat waves. Here’s seven take-homes from the article:

1) When rooftop solar is paired with a battery, the extra solar energy can get stored in the garage and used when the sun gooes down, or during a power outage.

Most people who have solar simply have panels on their rooftop. Solar-only systems help people cut their energy bills and share cheap, clean energy with their neighbors.

A growing number of people are adding batteries to their solar. Marquis Smith of American Canyon is one of them.  During the power outages of this past summer, Marquis not only kept his own power on, but he also helped his neighbors charge their phones and computers by plugging several extension cords into his house and tossing the other end over the fence!

Around the same time Marquis was tossing extension cords over his fence last August, state officials were begging others to share the extra power stored in their batteries. Overall, over 30,000 solar battery customers answered the state’s call for their stored energy. These folks delivered as much as 310 megawatts of electricity to the grid on August 15th alone.

This is the awesomeness of locally-made solar in a nutshell. Had state officials been more on the ball to proactively incentivize people to get batteries and share the energy from those batteries, we may have been able to avoid the rolling power outages of mid-August altogether.

3) “Virtual Power Plants” string together a little bit of the extra energy from numerous solar-powered batteries. That becomes a lot of local energy, which is then shared with the community.

For example: The solar company Sunrun is working with East Bay Community Energy to build a Virtual Power Plant in Oakland. Sunrun will install new solar and battery systems on homes across the city. Those homes will cut their energy bills and keep their lights on during a power outage. And, a portion of the energy stored in those batteries will be shared with the rest of the city, reducing the need to use polluting power plants on the hottest summer days.

Virtual Power Plants are being build around the state. Another example: solar users with batteries who live in the Ventura area are being offered a new deal in which which they are compensated $1,200 over three years if they allow a portion of the energy stored in their battery to be shared back to the grid during peak usage times.

The solar company Swell Energy will work with both customers and SoCal Edison to manage the flow of that extra energy throughout the community, kind of like an air traffic control for solar-powered batteries

This is great. But as the LA Times article points out, all of these efforts are tiny compared to what we should be doing.

5) Gov. Newsom should be working to make it as easy as possible for people to put solar on their rooftops and batteries in their garages so we can make our communities “outage-proof”.

The cost of rooftop solar has plummeted over the last ten years. Today, over a million Californians have solar. That’s no accident, but rather, a product of policies put in place a decade ago under Gov. Schwartzneggar’s leadership.

The cost of solar-powered batteries could also plummet quickly if state officials put similar policies in place for batteries.

More solar and battery systems means we can build Virtual Power Plants across California. That means when long-distance power lines fail, the community can keep the lights on with their neighbors solar energy – even at night!

6) Instead, state leaders from Gov. Newsom on down are dragging their feet, while utilities lobby state officials to make it harder and more expensive for people to get solar.

Solar advocates have repeatedly and unsuccessfully asked state officials for several years to proactively incentivize battery owners to share energy from their battery. Doing this would help encourage the buildout of Virtual Power Plants statewide.

Thus, it was disappointing but not surprising that LA Times reported that Gov. Newsom’s office “declined to comment on the story”. The Governor’s office instead passed the buck to the CA Public Utilities Commission (CPUC).

Yes, that would be the same people who let PG&E’s negligance off the hook for decades. Round and round we go.

It gets even worse. Not only is the CPUC out to lunch with respect to shovel-ready solutions to power outages like Virtual Power Plants. Right now, as we speak, utilities are lobbying the CPUC to kill off the growth of all local solar.

Specifically, the utilities are trying to gut net metering, which lets solar users share their extra solar energy with their neighbors for a bill credit.

7) That’s outrageous. We should not stand for it, and don’t need to.

We’ve seen this movie before, but we don’t need to accept it. The solution to skyrocketing electricity bills and power outages is clearly more rooftop solar and battery storage for more people.

Our take: Gov. Gavin Newsom needs to show some leadership, rather than just passing the buck to the CPUC (and by extension, utility lobbyists).

And the only way to get Gov. Newsom to show that leadership is to make it in his political interest. That’s where you come in. Stay tuned for more on this.