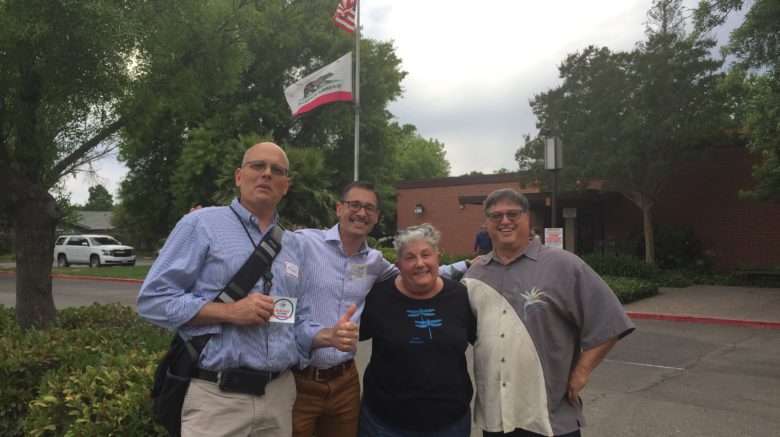 These folks helped lead the successful grassroots opposition to the Sacramento utility’s proposed $40-$60 per month solar fee. Since then, they’ve organized lobby days for the Solar Bill of Rights and launched a new campaign to improve their utility’s approach to solar.

Pictured left to right are Gabor Leidenfrost, Lee Miller and Alan Escarda (Solar Rights Alliance Executive Director Dave Rosenfeld is the guy in the orange pants). Each has played a critical and impressive role in rallying their Sacramento-area neighbors to defend the right to make solar energy at home.

Gabor, a longtime resident and state employee, was one of the first residents to sound the alarm when Sacramento utility officials proposed a devastating $40-$60/month solar fee in March. He went door-to-door in his area and posted on several neighborhood forums, helping alert a number of solar users to the threat and building visibility and momentum. He testified at a public hearing against the proposed solar fee, lobbied his state senator to support the Solar Bill of Rights, and joined forces with Lee and Alan to organize Community Members for SMUD’s Future, a new campaign to push SMUD to encourage rather than discourage solar.

Lee, a retired Intel employee, also alerted her neighbors when she learned about the proposed solar fee, and testified at two public hearings. Since then, Lee has stepped up in a big way. She has not only personally lobbied her state Assemblymember and Senator in support of the Solar Bill of Rights, but also recruited fifteen other residents to join her at these lobbying meetings, the largest Solar Rights Alliance local lobbying meetings yet. To recruit people for the meetings, Lee used Solar Rights Alliance’s peer-to-peer text messaging tool, allowing her to personally reach out to hundreds of Solar Rights Alliance members in the area in a few hours, and have personal conversations with interested people. Lee used these same tools to recruit over 30 people to the kickoff meeting for Community Members for SMUD’s Future. She co-facilitated the meeting with Alan and Gabor and has coordinated the subsequent followup activities.

Alan, a retired CalTrans engineer, also jumped into the fray when he learned of the solar fee, speaking out at public hearings, and lobbying his state Assemblymember and Senator in support of the Solar Bill of Rights. An experienced facilitator and strategist, Alan provided critical insights as the group developed the plan for Community Members for SMUD’s Future, shaping and helping facilitate the kickoff meeting agenda and subsequent game plan.

With the exception of Alan, none of these folks had grassroots advocacy experience. That’s because none is needed for you to make a huge impact defending your right to make energy from the sun! And even if you only have a little bit of time, we can help you draw from your own life experience to make a big difference.

Big thanks to these three for their efforts — and to you for what you do!