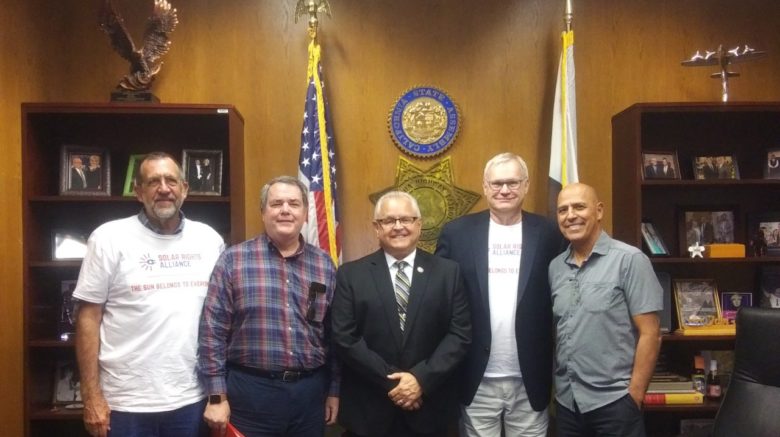 In late August, two dozen solar users from across the state joined solar workers at the State Capitol to educate lawmakers about the benefits of rooftop solar, part of our 2nd Annual Solar Lobby Day. All in all, we met with over twenty lawmakers or their staffs in one day.

Why do we organize Solar Lobby Day?

The main goal of Solar Lobby Day is to ensure lawmakers hear directly from solar user constituents like you. The utilities have an army of lobbyists that spread misinformation about solar every single day at our State Capitol. Solar Lobby Day is your chance to push back, and set the record straight, in a personal sit-down meeting with your lawmakers or advisers.

Do I have to come all the way to Sacramento to educate my lawmakers about solar?

No. Coming all the way to Sacramento is just one way you can directly educate your lawmakers, and we recently celebrated the efforts by dozens of other solar users to meet with their lawmakers locally.

That said, lawmakers are impressed when their constituents make the trek to Sacramento. Our group included a number of folks from Southern California, including San Diego resident and retired educator Tony Alfaro, who flew up that morning to make it (above photo, far right).

This year’s focus: How the entire state benefits from your solar

This year, our focus was making sure lawmakers knew that California hit the one millionth solar installation this year. It’s a huge milestone worth celebrating, and we wanted to make sure lawmakers were ready to celebrate it with us.

But we didn’t just want to celebrate. Telling the story about one million solar roofs was a chance to educate lawmakers about how solar benefits the entire state of California, not just individual solar users.

Telling this story is important, because the utilities falsely tell lawmakers that solar is a burden on the grid that increases electricity costs for non-solar users.

Fortunately, we had a great team of solar users ready to talk about how their solar benefits their household, and their community.

Teaming up with solar workers to praise solar’s benefits 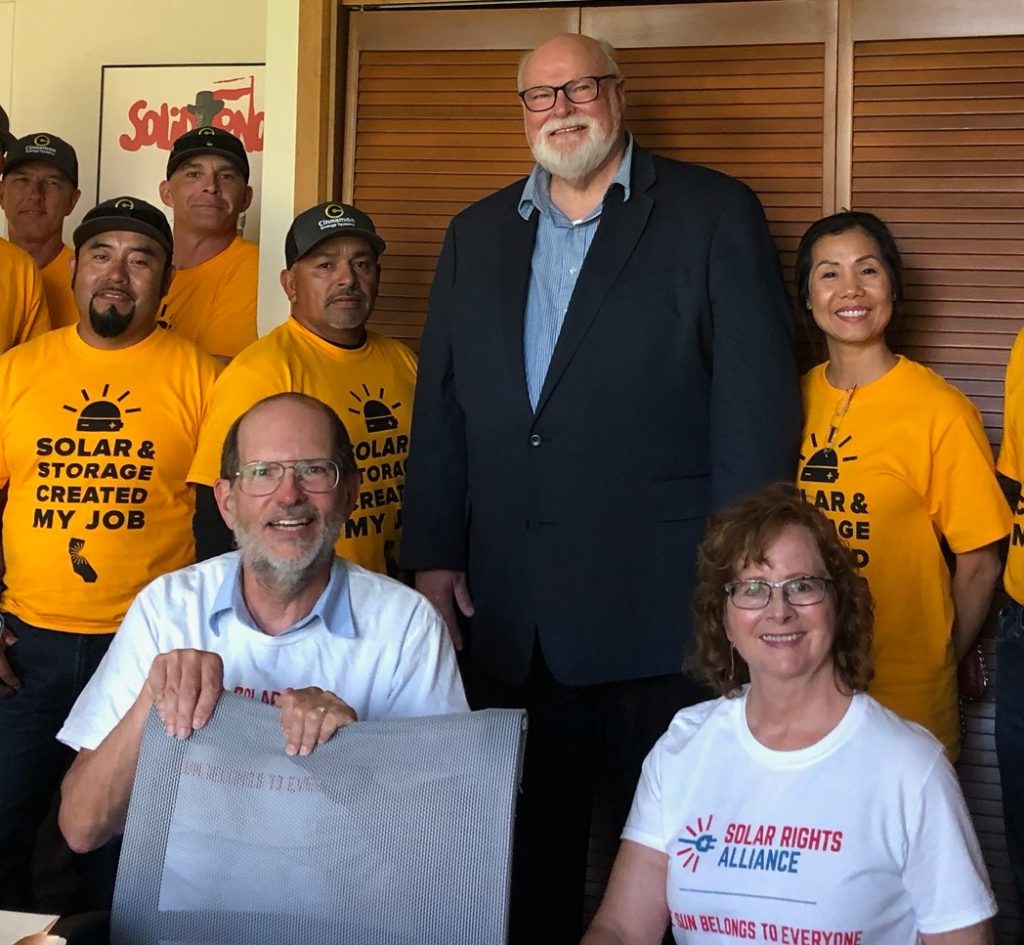 In this photo, Rob Hawley and Lia Dills (white shirts) were joined by local solar workers (yellow shirts) to meet with their state Assemblymember. These meetings were especially effective, because lawmakers could hear the benefits of solar from the perspective of the consumer, and those employed by the solar industry.

Challenging lawmakers: How does California get to five million solar rooftops?

In our meetings, solar users pressed lawmakers to think bigger with these question: How should California build upon this amazing one million solar roofs milestone? How will they work to make it happen?

Utility lobbyists made their mark, but so did solar users

Not surprisingly, the answers were mixed.

Some lawmakers were quite supportive of continuing to encourage people to make their own energy. For others, it appeared to be the first time they had considered this question.

In almost every meeting, it was obvious that the utility lobbyists had spread their message. But it was also clear that lawmakers appreciated getting the perspective of their constituents. In nearly every meeting, there was an opening to continue the conversation.

Continuing the conversation with lawmakers, locally

Which is where you come in. This fall and winter, lawmakers should hear directly from you through a local meeting. You don’t have to travel far, and we’ll help you schedule the meeting and recruit others to join you.

If we stay persistent and polite, and continue to show up and make our voices heard, we will continue spreading the freedom and independence of solar across California.

Thanks to all the solar users who met with their lawmakers this year, in Sacramento and locally!