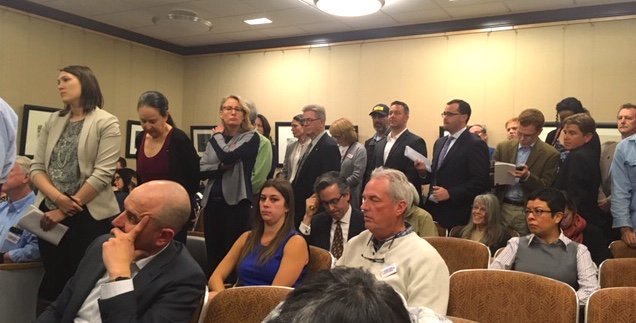 In front of a packed room of solar supporters (see below photo), a panel of powerful state lawmakers advanced the Solar Bill of Rights (SB 288) by a vote of 11-0 at the State Capitol in April. This, despite aggressive, misleading arguments against the bill by a crush of utility industry lobbyists.

The bill is not law yet, and has several major hurdles and many more months before we can celebrate.

But the vote was a BIG milestone — and it’s all because of you and thousands of fellow solar users who exercised your rights as a citizen:

Here’s what the room looked like when the public was asked to line up and give their opinion:

Get the picture? Your efforts do matter, when we all speak together.

So take a bow.

The bill now advances to the Senate Appropriations Committee, where we will have to win another vote soon.

Things are going to get harder from here. The utilities made aggressive, misleading and tricky arguments. Their lobbyists are in the Capitol every single day.

Our side is much larger and has more popular support, but less ongoing presence in the Capitol. So please keep your attention on this issue, and look for updates soon about the next steps you can take.

If we stay focused, the Solar Bill of Rights could become law in a few months, giving us new protections from discriminatory fees, red tape, and any effort by the utility to reach behind your meter and control your solar energy.