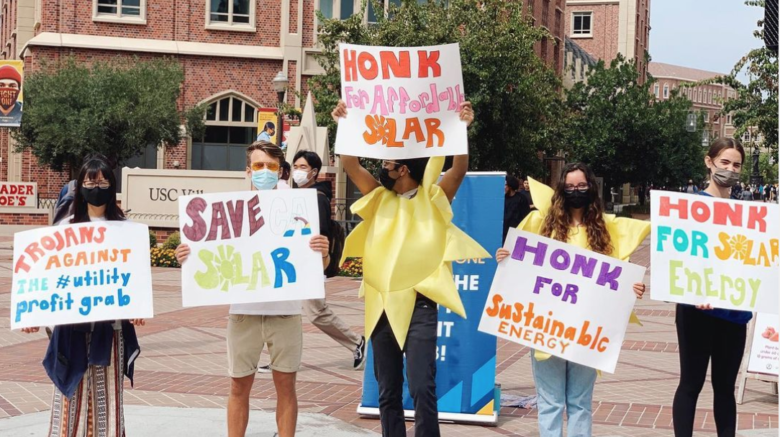 This week, the LA Times published a story about the fight over rooftop solar, followed up by a smaller article. Here’s eight take-homes from the story.

1) Everyone loves rooftop solar, including working and middle class people.

By featuring new solar user Marta Patricia Martinez, the LA Times illustrated an important fact: just under half of all new solar is going into working and middle class neighborhoods.

A recent poll confirmed a consistent finding from past public opinion research: Rooftop solar is incredibly popular. 80% of the public supports the state encouraging people to get rooftop solar.

It is a no-brainer. Almost everyone wants more tools to control their energy bills and avoid blackouts. Many people want to also do more to protect the environment. Solar on the roof and a battery in the garage checks all of these boxes.

Solar Rights Alliance is part of the Save California Solar coalition, which includes over 400 groups and community leaders. Check it out. It’s a big list, and growing every day. It includes heavy-hitter organizations and lots of local grassroots groups.

3) The state has big problems for which solar energy helps, namely wildfires and blackouts.

Quoting directly from the article:

“But even as the heat waves and wildfires of the climate crisis worsen — and as monopoly utility companies struggle to keep the lights on — Gov. Gavin Newsom’s administration could soon make it harder for many families to go solar.”

4) Yet, the state is considering changes that would slow down the adoption of rooftop solar by making it twice as expensive.

Not quite. All signals coming out of Newsom’s closest aides and Public Utilities Commission (CPUC) officials indicate sympathy with the utility arguments. They appear to be seriously considering changes that include penalty fees on solar users between $35 and $91 per month just for putting solar panels on the roof. They are also looking at making big cuts to the credit solar users get for sharing their extra energy with the community. Fact sheet about the utility proposal.

5) How is that possible? Because the utilities, who can’t win this fight on their own, have a small group of powerful organizations on their side. This lets the utilities confuse the debate, misleading many in the Sacramento bubble to believe there is a controversy over rooftop solar when none actually exists.

More reading: deep dive on the utilities and the above echo chamber.

6) The utility coalition is trying to confuse the conversation. But Gov. Newsom and the CPUC have little reason to be confused about where the people stand on rooftop solar.

Because the utility coalition is stacked with some of the most powerful insiders, they still hold the upper hand with many political insiders in Sacramento bubble. But there should be little reason for confusion at this point.

Gov. Newsom and the CPUC have seen the polling. Over 70,000 people have submitted a public comment. Dozens of people line up to verbally testify at the CPUC every other week. Hundreds of nonprofit organizations have sent letters. Well-regarded experts have shared research showing how rooftop solar reduces costs for everyone, even those without solar.

They have also likely seen the SOS message our coalition dug into the sands of Huntington Beach. The hordes of solar supporters protesting in front of PG&E and SoCal Edison‘s offices this week, or spreading the word at farmers’ markets across the state. Or any number of the videos we’ve been pushing out all over the internet.

This may sound hollow to those who are weary of the relentless stories of corruption with respect to the PG&E and other utilities.

So please remember this: Rooftop solar is incredibly popular, even among those who don’t have solar yet. It is the best way to control skyrocketing energy bills. With a battery, it is also the best way avoid blackouts.

These are the kitchen table issues that can make or break a politician.

So make your voice heard – loudly and frequently!

8) Here’s what the expect, and how you can make your voice heard.

The CPUC will make a final decision early next year. Between now and then, we want to do a few things:

Deliver 100,000 public comments to Gov. Newsom and the CPUC on December 1st.

Get media attention on this issue.

Make sure lots of everyday people give verbal public comments at CPUC meetings.