Update on the utilities' effort to penalize rooftop solar

This, and the other components of the CPUC’s proposal, are a near-carbon copy of what PG&E and the other investor-owned utilities have pushed for months. If Gov. Newsom doesn’t step in, these changes will be finalized by January 27th and go into effect this spring.

What the CPUC proposed

1) $57 per month solar penalty fee for putting solar panels on the roof. The more solar panels, the larger the fee. This includes apartment buildings, new homes built with solar per the state mandate, and solar-powered batteries. The fee would be the largest in the U.S.A.

2) 80% cut to the credit solar users get for sharing surplus solar energy with the grid. The credit would drop from an average of twenty-five cents per kilowatt hour to about five cents. This cut happens immediately; we predict it will end the solar market overnight.

3) Rollback of protections for existing solar users. Existing solar users are currently protected from changes to net metering rules for 20 years from the date their system turned on. The CPUC is now proposing to reduce that protection to 15 years, and eliminate the protection altogether if you accept their battery rebate.

The CPUC’s proposal is a terrible deal for all working and middle class people regardless of income level. The CPUC claims that their proposal helps low-income people afford solar by exempting them from the solar penalty fee while providing a subsidy of $15 a month for ten years. But we ran the numbers and it doesn’t pencil out. Solar would still be more expensive for low-income people than the status quo.

Link to the CPUC’s proposal

Governor Newsom has not yet taken a stand

Technically, the CA Public Utilities Commission (CPUC) will make the final decision early next year. However, Governor Newsom has not yet taken a stand. If he does, it would likely have a big influence on the outcome.

Lots of people are standing up for solar

Over 120,000 people have submitted a public comment to both Governor Newsom and the CPUC asking them to rebuff the utilities’ efforts, and instead keep encouraging rooftop solar and battery storage in California.

In addition, over 600 nonprofit organizations and community leaders have asked Gov. Newsom to take a stand on this issue. This is good, because it will take many different kinds of people asking the same thing to get Newsom’s attention.

The utilities have so much influence with our government. Does grassroots pressure actually make a difference?

It can, if enough voices speak loudly enough together.

For example, earlier this year, grassroots pressure helped defeat utility-backed legislation (AB 1139) that would have ruined your solar investment. Lawmakers told us that the flood of phone calls from hundreds of constituents made the difference.

Below are a menu of activities that people around the state are doing to raise the profile of this issue. Consider choosing at least one of these activities to add your voice to that of others.

Alert your neighbors with solar

Write a letter to your local newspaper 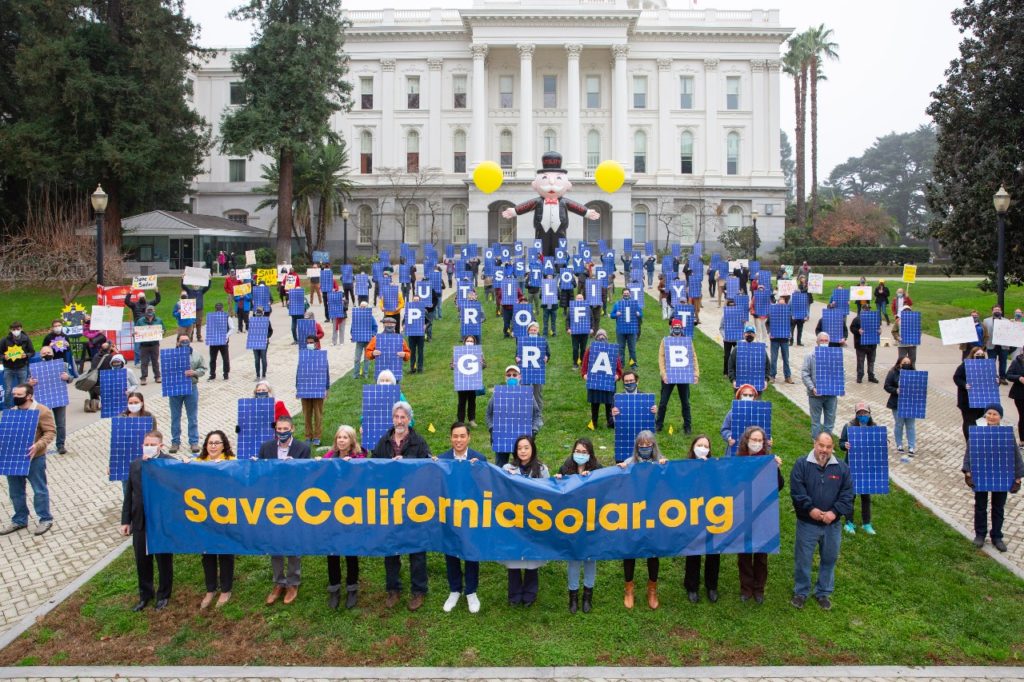