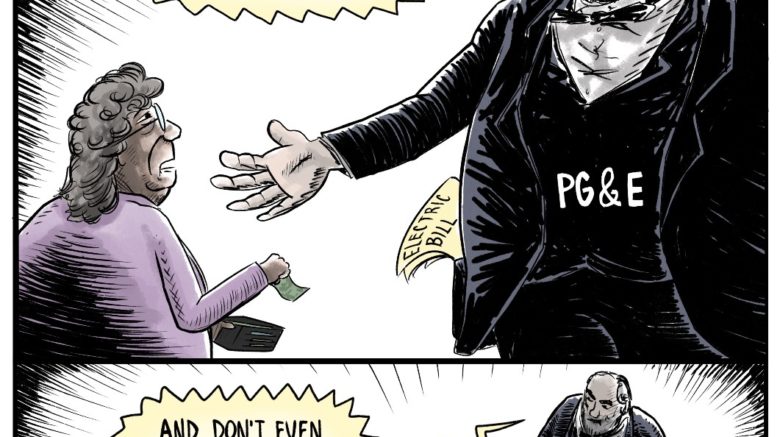 On March 15th, California’s three investor-owned utilities submitted a joint proposal intended to pressure the CA Public Utilities Commission (CPUC) into making consumer solar two times more expensive than it is today. The utilities’ proposal would put solar out of reach for most working and middle class people, just when recent studies show they make up nearly 50% of today’s market. Fact sheet on utilities’ proposal

Net energy metering (NEM) allows consumers who have solar on their apartment building or school to generate energy onsite and send extra electricity back to the grid in exchange for a simple bill credit.

Utilities oppose net metering because it reduces the need to build more poles and wires to transport electrons from distant power plants, which in turn cuts into utility profits. Consider:

What the utilities proposed

2) Slash the credit consumers receive for surplus solar electricity sent back to the grid by 77%. This means that when a solar user shares electricity with their neighbor, the utility would charge the neighbor 25 cents while giving the solar user just 5.7 cents in bill credits.

How this will affect rooftop solar

The utility proposals will make solar unaffordable for working and middle class people, stall out the solar market, and undermine the state’s clean energy goals.

Roughly one in ten California ratepayers have solar, totaling more than a million solar roofs, including 150,000 solar roofs for people receiving discounted energy rates through the CARE program. Those who already have solar won’t likely be affected by the utilities’ proposal. Everyone else: no solar for you unless you’re willing to pay double today’s prices.

In addition, the solar industry supports thousands of small businesses and over 70,000 jobs. A few years ago, the Nevada solar industry collapsed with mass layoffs when the state’s utilities got rid of net metering (later reinstated).

The utility proposal also contradicts the state’s much-ballyhooed drive to get 100% clean energy, and get people to switch to electric cars and appliances. The California Energy Commission estimates California will need three times as much rooftop solar as it does today to meet its clean energy goals.

The public is opposed to these proposed changes

A new poll sponsored by the CA Solar & Storage Association and Solar Rights Alliance shows overwhelming public support for net metering, and for expanding solar power in general, and clear public opposition to efforts by utilities to gut net metering.

The last time utilities tried this kind of power grab was in 2015. Over 100,000 Californians flooded the government with messages, in-person testimony and letters to the newspapers (pictured in the photo above). We succeeded then and can succeed now. But we need you.

Please head over to our new campaign website and take action: www.SaveCaliforniaSolar.org