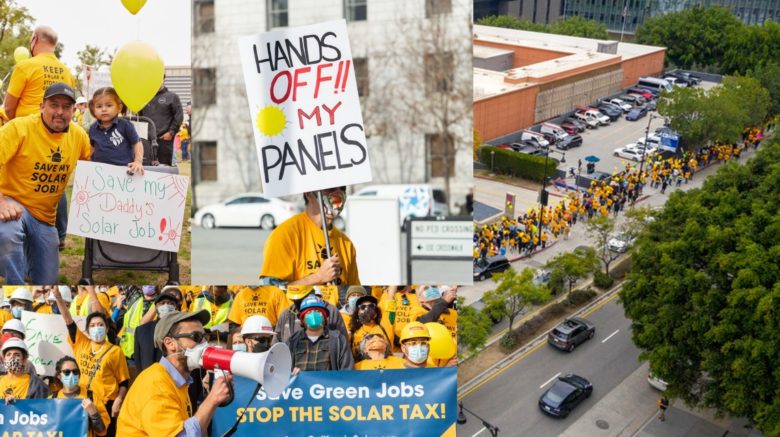 Most people, including Governor Newsom, agree that the CPUC’s proposed rooftop solar decision (Net Energy Metering 3.0 or “NEM3”) needs to be changed.

The billion dollar question now is, “what changes will Governor Newsom and the CPUC make?”

Since the CPUC’s original proposal from December is so extreme, measuring the effectiveness of the Governor’s response must be based on basic public interest principles, not simply whether or not the original proposal was modified in some way.

The vision: Keep growing rooftop solar everywhere for everyone, and add batteries. Wash, rinse and repeat

We should judge any changes by that vision. Do the changes make it easier for more regular people, schools and businesses to get solar and batteries? Or less?

What Governor Newsom should support

It’s simple. The government should not penalize people for doing the right thing. Solar-only recurring fees or charges are unacceptable.

Existing net metering rules protect current solar users from changes to net metering for 20 years from the date their system turned on. The CPUC proposed to reduce that protection to 15 years. They need to throw that out and honor the 20-year protection. The consumer group CALPIRG explains why in this article.

Net metering is the policy that lets solar users receive bill credits for the extra energy they send back to the community. It’s what has allowed working and middle class households, schools and businesses to make long-term financial investments in rooftop solar.

Net metering 3.0 should continue to allow solar to pencil out for middle and working class households, schools and businesses, and also encourage people to invest in solar-charged batteries.

In addition, the CPUC should fix a few things that currently block many working class households from getting rooftop solar. First, they should allow all solar users to get the full net metering credit regardless of income level. Currently, the CPUC shortchanges many low-income solar users, only allowing them to get a partial net metering credit. That’s like saying “your extra solar energy is worth less because you’re poor”, which is insulting and untrue.

Second, the CPUC should also allow more renters to benefit from rooftop solar by requiring utilities to offer “Virtual Net Metering” (VNEM) for all multi-family homes in California. VNEM allows renters to directly get bill credits from the apartment’s solar, with a minimum of red tape and expense. Right now utilities only allow a small number of multi-family solar projects to qualify for VNEM; the CPUC should fix that.

Governor Newsom and the CPUC should also reject the utilities’ fallacy-driven claim that rooftop solar users don’t pay their fair share of the grid. It’s nonsense, as outlined in this letter signed by 129 nonprofit organizations, in this white paper, and by respected economists and newspapers.

This is Governor Newsom and the CPUC ‘s opportunity to put people at the center of their decision, rather than the utilities. That’s their obligation and responsibility. Will they stand up for rooftop solar? That’s the billion dollar question.