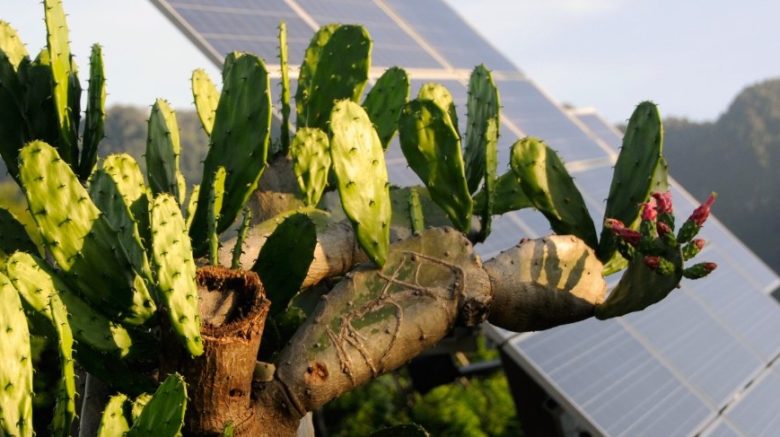 Bottom line? More planned electricity outages are on the way, but solar and storage can help. Here’s seven takeaways (and one cool photo):

1) Expect more planned electricity outages if you live in a fire-prone area.

“The state’s biggest investor-owned utilities, Pacific Gas & Electric and Southern California Edison, are expected to de-energize power lines more frequently this year to stop them from igniting fires when the weather is dry and windy. It’s one of the fastest and cheapest ways for utilities to keep wildfires from sparking.”

2) More and more consumers are adding battery storage with their solar to insulate themselves from planned blackouts.

Côme Lague, owner of La Mesa Vinyard in Amador County, added battery storage to his existing solar system to ensure that his electricity stayed on during the critical grape harvest season (more).

Increasing numbers of residential and commercial consumers alike are doing the same, creating what’s called an “islanded system” that can keep the lights on when the grid goes down.

3) Solar paired with storage should become more important to the state as a way to prevent wildfires.

Solar plus storage isn’t just beneficial for individual consumers, but also entire communities. We have the technology to stitch together individual solar/storage systems into what’s called a “microgrid”. That’s the way individual solar users can supply their excess energy to others in the community when they need it — without relying entirely on a centralized system.

It’s a cool vision for the not-too-distant future. Getting there is complicated, but boils down to two things. First, the cost of battery storage needs to drop so more people can afford it. Second, the officials who run the grid need to update their systems to easily route all this excess electricity to the right place.

4) Recent action by lawmakers will help drive the cost of storage down.

Thanks to Solar Rights Alliance members and other pro-solar advocates, state lawmakers extended the storage rebate, which can pay for one-third to half the cost of an energy storage installation. That’s a big deal, and it is projected to help drive down the cost of storage over the next few years (more).

5) But red tape from the utilities remain a significant obstacle to expanding battery storage.

It can take over a year or longer to interconnect your new battery system to the grid, due to an excess of red tape by the state’s utilities. That drives up the cost and discourages many from even trying.

It’s totally unnecessary, but par for the course for the utilities, who have an interest in preventing people from being completely free of their monopoly.

The LA Times article notes that Southern California Edison and PG&E don’t even mention microgrids in their planned blackouts strategy plan. And state officials in the article downplay the microgrid’s significance in the near run.

But are they missing something here? Stanford University energy expert Michael Wara had this to say:

Installing a microgrid is “not super cheap, but it’s feasible and can be done quickly,” Wara said. “If the benefits are avoiding burning down a community in Northern California, that’s a pretty darn big benefit.”

7) The Solar Bill of Rights, if passed, will help remove some of these obstacles.

A centerpiece of the Solar Bill of Rights (SB 288) is guaranteeing the right of every Californian to interconnect their solar and storage to the grid quickly without red tape. The bill instructs state officials to ride herd on the utilities to make this so.

The Solar Bill of Rights also sets a new state policy that recognizes solar and storage as “valuable assets for managing the electrical grid efficiently and improving the reliability and resiliency of the grid.” (more)

Here’s the link to the LA Times article again.