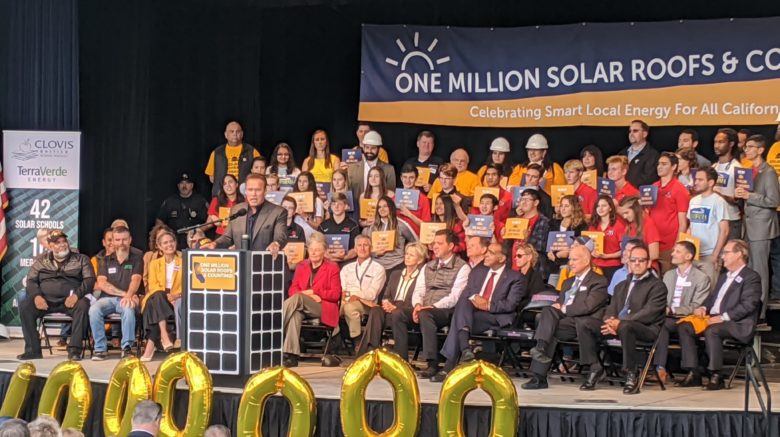 This week, solar users, solar workers and students joined former Govs. Arnold Schwarzenegger and Jerry Brown at Buchanan High School in Clovis to celebrate hitting One Million Solar Roofs this year. It’s a huge milestone, and worth celebrating because solar has been great for the people of California.

“Being a veteran, I feel that by going solar I’m still helping to protect the world that we share and live in” 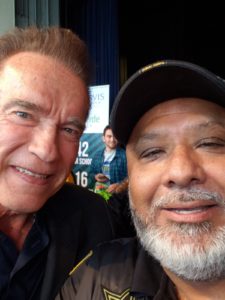 Madera resident and Army veteran Ramon Torres (that’s his selfie with Gov. Schwarzenegger) spoke at the event in Clovis, saying this about his decision to install solar:

“I went solar to help lower my monthly utility costs.  I see it as an investment for the future and an investment for my family.  We as Californians should do our part in helping reduce our carbon footprint.  The state government should help promote and enable our communities to transition to going solar.  Global warming is a fact and every person in this great state can help promote and reduce the dependency on public utilities.  Going solar is logical and it doesn’t pollute, it uses the sun to help produce and harness free energy.  Being a Veteran I feel that by going solar I’m still helping to protect the world that we share and live in.”

We got this far because of some good decisions state leaders made in 2006. Back then, only 20,000 solar installations existed in the entire state. Solar was a great idea, but still too expensive for most people.

Then-Gov. Schwarzenegger and former state senator Kevin Murray led the effort to convince the Legislature to adopt the Million Solar Roofs Initiative (SB 1-Murray). That law set a goal of building a million solar energy systems on homes, schools, farms and businesses throughout the state. It also created a rebate for installing solar.

Combined with a federal tax credit and the expansion of net metering, the upfront cost of solar dropped.

The cost of installing solar has dropped so much that nearly half of all new solar is going up in neighborhoods at or below the median household income, according to the CA Solar & Storage Association.

Solar is saving you money. It’s also saving all ratepayers money by reducing the burden on the electricity grid. For example:

Reduced energy costs for all ratepayers

For example, state officials in charge of the electricity grid modified or canceled $2.6 billion in transmission projects in 2018, citing both rooftop solar and energy efficiency as the reason.

Making and storing energy on one’s property is the best way to keep the lights on when the central grid goes down.

With more investments in a smarter grid, rooftop solar and storage can help keep an entire community’s lights on in an emergency.

This is especially important for disabled and medically vulnerable Californians, who currently have few options when the power goes out.

So what’s next? It took 13 years for California to add a million solar roofs. Imagine if we got to five million in the next ten years! And imagine if most of those systems also have battery storage!

Five million solar roofs would allow even more Californians from all walks of life to put money back in their pockets, reduce the burden on the grid and keep their power on in emergencies.

Clear the obstacles to solar!

Solar is a lot cheaper now than in 2006. But as most solar users are aware, utilities are attacking solar with a vengeance, fearing an end to their monopoly. The utilities’ attacks on solar make it harder and more expensive for people to choose solar.

So if state leaders are serious about empowering five million Californians to make their own energy on their property, they’re going to need to stop the attacks on solar. Here’s three things they can do:

Want to help push your lawmakers to embrace a vision of five million solar rooftops? Sign up to educate your local lawmakers about solar!